5 Musts at the Texas State Fair 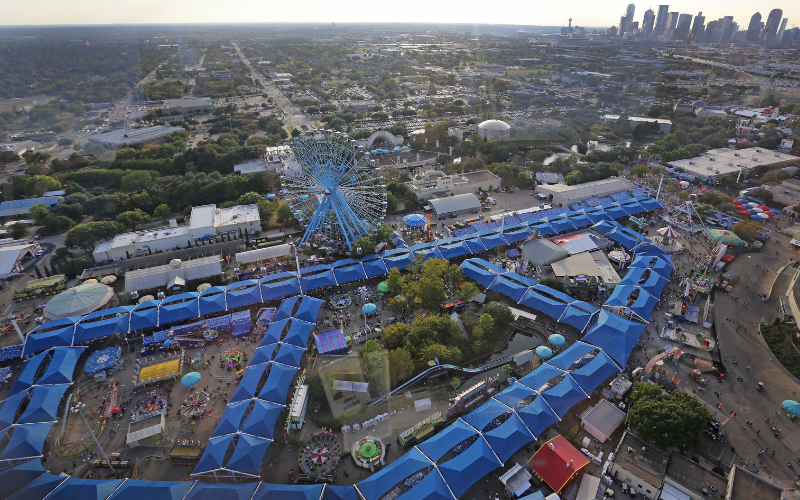 Texas has officially welcomed fall with a big “Howdy!” — and that means Big Tex is here to usher in another great State Fair of Texas. Taking over Dallas’ historic Fair Park from September 28 to October 21, this year’s iteration of the best state fair in all the land will be celebrating Texas innovation. Whether you’re in it for the shows, the rides or (it nearly goes without saying) all things deep-fried, here are the top five attractions, events and fair-goers’ favorites you won’t want to miss.

Kick off the 132nd annual State Fair by following the Opening Day Parade on September 28. You can spot colorful floats, balloons, bands, drill teams and more as they wind through Downtown Dallas. The procession begins at the corner of Houston and Main Streets around noon, traveling east and winding down at Main and Good Latimer in Deep Ellum. Prime viewing spots for getting into the fair-going spirit include Main Street Garden (1902 Main St.), Pegasus Plaza at City Center (1500 Main St.) and the Old Red Museum (100 S. Houston St.).

In commemoration of the State Fair’s 2018 theme, the Hall of State will also host a brand-new exhibit this year that’s sure to tug at the heartstrings of any deeply proud Texan. The “Celebrating Texas Innovation” showcase will give viewers a first-hand look at the state’s legacy of inventiveness. Expect to be surprised and delighted to discover just how much medical, agricultural, artistic, scientific and culinary creativity the Lone Star State has given the world.

Once you’ve observed the State Fair’s theme, it’s time for the real fun to begin. The Midway is known for its incredible assortment of carnival rides, and this year the AIRMAXX Attraction has been added to the mix. Don’t be fooled by the gentle sweeping motion that marks the start of this adventure. Within seconds, the swinging will increase to speeds of 55 miles-per-hour, culminating in a ‘round-the-world spin as you make a 360-degree circle high above the ground. Needless to say, we suggest laying off the heavy fair food beforehand.

Of course, it wouldn’t be the State Fair of Texas without a few world-class performances. There’s plenty to choose from in 2018, but we recommend starting with the family-friendly All-Star Stunt Dog Show. Expect mind-blowing tricks flawlessly executed by man’s best friend, such as jump roping, barrel-racing and even juggling. Each one of these amazing stunt dogs has been rescued from a shelter and trained with love and care. This free performance will run daily in the Pan American Arena.

Last but certainly not least, it’s time to talk food. If you’ve ever attended the State Fair, then you know the drill — come with a strategy or an elastic waistband, and preferably both. Although there’s plenty of unique menu items to choose from, you especially don’t want to miss the three 2018 Big Tex Choice Award winners. Fernie’s Hoppin’ John Cake — a fried ball of black-eyed peas and white rice — placed first in the Savory competition, while a fried Arroz Con Leche (Mexican rice pudding encased in a crispy shell) dominated the Sweet category. And what did the judges deem this year’s “Most Creative” treat? The Cotton Candy Taco. Need we say more? Grab a map when you first enter the fairgrounds to track down each of these sure to be popular concoctions.